The title is my dopey rendering of a question that has been repeated for decades. In an earlier “Privileged View” post I visited photography’s tricky relation to narrative. But how about poetry? It seems to me, that beginning in the 1950s a most significant and lasting thread among the aesthetic projects of photography has been an evolving poetics of imagism. 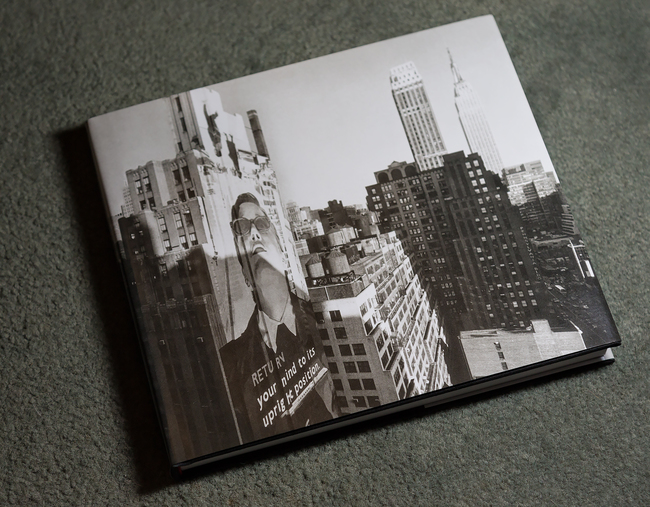 The Imagist Abides: The imagist thread of photograph publication has not been a noisy practice, but in its decades beneath the racket of style and theory, it maintains a substantial continuity. Above, on my studio carpet is Return Your Mind to its Upright Position by Nathan Lyons, with an afterword by Alex Sweetman. –August 2014. #

Ernest Fenollosa’s essay, “The Chinese Written Character as a Medium for Poetry” alleged that the Chinese ideogram was the least abstract medium for poetry because it was rooted in a direct depiction of the world. Since its publication in 1920, the work has been so repeatedly and thoroughly discredited that the most significant feature of this text is that Ezra Pound wanted it to be true. But the imagist ideal in poetry never really required such a buttress, its central principle being that the marriage of well-articulated images may yield illumination through their resulting metaphor or the emotional recognition of, in the language of T. S. Eliot, the “objective correlative.” Imagism’s ideal of concrete language and its loathing of fuzzy writing that told you how to feel, amounted to a kind of reformation in literature that ran through the middle of the 20th century.

I’ve spent 45 years indulging a fascination with photographs and the work that they do in culture. And consistently, from the 1950s to the present, there have been photographers whose works exemplify a sympathetic relationship between imagist poetry and the arrangement of photographs in books and exhibitions. For me, an early model was the photographer Minor White. For my wife, he was a family friend – as was the imagist poet William Carols Williams. Both artists were household guests in Linwood, New York, producing work while in residence. I know of no collaborations but Minor was aware of the poet’s idea of the image as fundamental particle in poetry. As Minor’s career grew to include curatorial work, he completed projects whose aesthetic practice could align in almost perfect registration with the literary values of later day imagists. Minor’s book Mirrors, Messages, Manifestations depends on the ineffable effects of careful image grouping and juxtapositions. Similarly, his curated project “Be-ing Without Clothes” at MIT employed numerous works by other photographers arranged to achieve aesthetic effect that did not necessarily inhere in the works of contributing artists. And more than any other single photographic work, Robert Frank’s The Americans provided an early demonstration that this medium could re-make imagist poetics as its own. For my generation, this book of images was a two-ply icon for: a) what it revealed of my country – and b) for what it exemplified as a proper job for photographs.

Throughout the boom years for the market in fine art photographs there has continued to be the steady practice (mostly through publication) in a visual poetics employing the arrangement of photographs to illuminate the “objective correlative” unobtainable from any single constituent image. I don’t know that any of these artists would self-select to join the group, but in addition to Frank and White I am thinking of such photographers as William Klein, Nathan Lyons, or even Ralph Gibson – while all are dissimilar with regard to subject, emphasis, and style, they all contribute to a continuing practice of imagist poetics.

With over a half century of photo-imagist production, including significant landmark publications and exhibits, I’d say this little sub-genre will be around for a while. It is not a fashion or a style. It is a new poetics that has evolved within the only slightly older practice of photography itself.