The Ambiguous Specificity of Photographs

My friend, videographer and photojournalist Keith McManus (sitting on the right in the photo below), has said that photographs by themselves are not particularly good at storytelling – they are way too ambiguous. And he celebrates the ambiguity of images as an empowering feature of the medium. So just as the world’s events are subject to interpretation, photographic traces of those events will also call for context, reasons, or histories, if they are to substantiate a narrative. 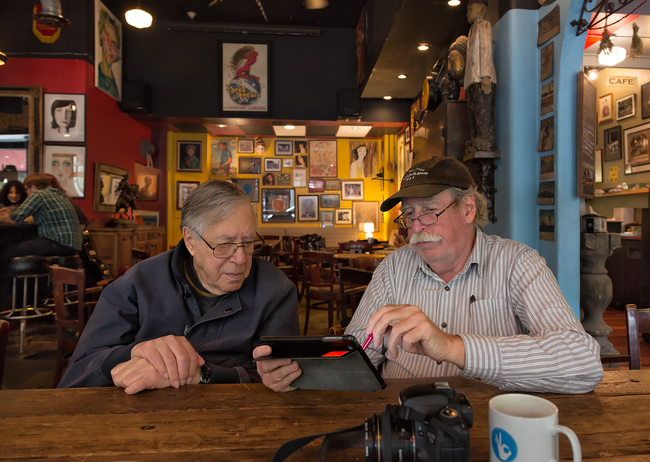 These friends convert Saturday mornings into a caffeinated public house. We float from dive to dive depending on season, mood – lately, noise levels. I have never had better coffee or instruction. #

That photography is narratively challenged may make it easier for its images to aspire to the condition of music. To the extent that it exists, this deficit of the medium is largely responsible for the industry of fine art photography. I was born in 1946, so I remember when photography’s aesthetic projects were generally viewed as aspirational in relation to the other visual arts. In the mid 20th century for example, photography had not been embraced by the College Art Association (CAA) as worthy of study at the college level (outside departments of journalism that is). So it is not surprising that growing and energetic numbers of practitioners might seek to establish a CAA of their own. Indeed, in 1962 Nathan Lyons (seated on the left in the above picture) invited educators, photographers, curators, and others to Rochester, NY to frame goals appropriate for college level study. The forum grew to become the Society for Photographic Education (SPE). That SPE survives to this day – even though photography’s success in the art world has become an embarrassment of riches – may indicate that the medium’s insinuation within fine art makers and markets was never the point. It is an exceptional condition of photographic media that prevents a particularly neat fit within the studio art departments of the academy.

There remains a distinguishing challenge for photography and its related media arts. Here it is: They are the active and current channels for the delivery our visual representation of the world. In the decades following 1839, photography quickly sidelined drawing and painting as the primary provider of information about the visual universe. Those media were now free to indulge increasingly aesthetic projects unencumbered by a burden of reportage. New works in painting and sculpture were to become interesting as things themselves. History had never contained anything quite like photography.

Photography’s capacity to snap recordings from within the chaos and roar of our visual field means that images may easily contain far more than was seen or understood by the photographer at the moment of exposure. Understanding of a photograph can be far from immediate or obvious. Its precise comprehension as artifact may incline to language for delineation of context and interpretation – or at least, to additional photographs to provide for the study of additional photographic evidence.

As a framer of precisely bounded views, a photograph is a famously persuasive reporter, but this visual authority may easily deceive through omission or false implication. And its optical precision and specificity undermine its ability to generalize. In 1969 The American Heritage Dictionary broke with tradition by employing copious use of photographs in its definitions. Previously, general reference dictionaries may have used a few illustrations but avoided photography altogether. I remember this event prompting discussion at Rochester’s Visual Studies Workshop and George Eastman House in the early 1970s. The American Heritage Dictionary had created a social experiment in the use of photographs to establish the meaning of words. I recall the conversation going something like this: Imagine that it is our task to define “pig.” A couple of sketches or archaic engravings would illustrate general shared characteristics and porcine proportions. But would not a photograph portray an actual and specific pig that lived and died here on earth? A pig with an arresting curl to a glistening snout? It is entirely possible that the most compelling photograph would undermine the job of illustration.

On its own, photography is a wobbly storyteller precisely because it is so damn good. 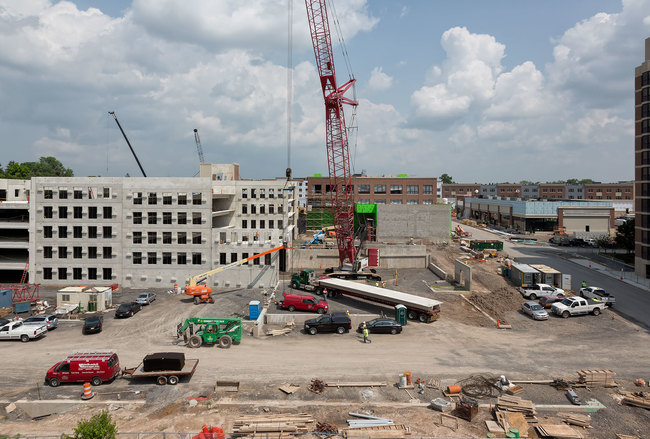 I often find a photograph appealing for its “Where’s Waldo” salad of finely articulated ingredients. Here’s one from atop a hospital parking lot in Rochester, New York. I’m thinking of a coffee table for some reason. And on it, a volume for children. “Busy Builders Building Buildings.” I may be missing something. It’s hard to find all the connections in these things. #

And Contemporary Anxieties over Too many Photographs Have you noticed the fashion of iconoclastic postings repeating reservations on the escalation of photographic production? In a few centuries such concerns will be viewed as... Continue →